But lately, the classic cartoon has the runway visibility of a supermodel, thanks to recent appearances with Gucci, Gigi Burris, Karen Walker and Rag & Bone in honor of his 90th birthday on November 18. Mickey mania joins a larger Disney trend for Spring/Summer 2019 that includes Burberry’s Bambi name-check, Kaia Gerber in a Peter Pan sweater at Coach 1941 and Disney graphics heavily featured in the H&M x Moschino collaboration.

“I gave Mickey and his friends a new wardrobe,” designer Jeremy Scott said before the Moschino runway show, brandishing a parka with Donald Duck dressed like Diplo.

Like everything Disney does, Mickey and company’s suddenly ubiquitous runway presence was meticulously planned, part of a broader effort to boost merchandise sales for everything from $7 markers to $1,700 Gucci sweatshirts, said Josh Silverman, the company’s executive vice president of global licensing.

“Disney is for everyone, so we try to make Disney connections for every aspect of life,” he said from Disney’s Burbank campus. Among the fashion partnerships he’s approved are collaborations with style legends like Givenchy and Marc Jacobs, plus buzzy new designers like Ashley Williams and Bobby Abley.

Decades-old elements of Disney’s sales strategy would look familiar to today’s hottest fashion brands. The “Disney Vault,” where classics like Aladdin were taken out of circulation for years and then reintroduced, are a precursor to streetwear’s limited-edition drops. High-low tie-ups have been a staple of Disney marketing since the 1930s, with characters appearing on everything from Converse sneakers to Goebel porcelain.

Today, Disney employs an extensive network of marketing magicians to dream up new tactics to keep the brand culturally relevant. Among the most effective: connecting content and commerce through emotional threads, open-sourcing characters, inclusivity, gamifying the brand experience, and using social media as a magic mirror.

Combined, the strategies make a double rainbow of revenue and relevancy for Disney’s modern audience, and illuminate potential paths for fashion brands, too.

When approaching fashion collaborations, Silverman said his team always asks: “How do we manifest an emotional connection through physical product?”

Often, the answer is nostalgia — “Everyone has Disney memories as part of their childhoods,” he said. “Our challenge is connecting with people again and again as they grow up.”

He cites the Opening Ceremony runway show in March, held at Disneyland in Southern California.

“All kinds of people came — celebrities, editors, critics. These people are constantly courted by brands; it takes a lot to impress them,” Silverman said. “But every single person who walked into that show had a huge smile on their face, and we hadn’t even done anything yet!”

Though most brands can’t claim the childhood connection that’s intrinsic to Disney’s identity, they can coax elemental senses of wonder and into jaded luxury consumers without losing brand DNA. And nostalgia is one of fashion’s hottest trends right now, with Versace and Marc Jacobs among the luxury labels mining their archives.

“Part of Your World” – How Disney Embraces Open-Source Fandom

Three decades ago, Disney famously sued a daycare center for painting Mickey on a wall, and took the Oscars to court for including an actress dressed as Snow White in an opening medley. But under Silverman and his team, the company has embraced fan art.

“We have surprising flexibility in how we look at our characters,” said Heather-Laing Obstbaum, Disney’s vice president of product development. “Our character art might shock Disney purists.”

The definition of a successful brand is that it becomes part of people’s actual sense of self.

Disney will actively encourage fan art via a new user generated partnership centered around villains from the company’s films getting social media makeovers by fashion illustrators, according to a person familiar with the project.

“I think they would have made even more money if they’d done it sooner,” said Gavan Fitzsimons, a professor who studies brand psychology at Duke University’s Fuqua School of Business. “For a long time, probably too long, Disney had an old-school mindset that you see with many heritage brands, and that mindset is ‘cease and desist.’

He said brands typically see themselves as owning their identity. In fact, they are “co-creators” with their customers, he said.

“The definition of a successful brand is that it becomes part of people’s actual sense of self,” he said.

While the fashion industry still holds tight to the reigns of brand identity, a few have started giving fans legroom instead of lawsuits. Gucci Ghost and Dapper Dan began with unauthorized homages to the brand’s classic monogram before receiving Alessandro Michele’s blessing via official collaborations.

“[Brands] have to let people interpret and interact with them in ways we haven’t seen before,” Silverman said. “Disney enters into collaborations for that very purpose, so we don’t get stuck.”

Disney princesses are all girls, but their fan merchandise tells a different story. In recent years, Disneyland’s princess salon, the Bibbity Bobbity Boutique, has started welcoming boys into its pink glitter chairs, while fewer licensed costumes are labeled “girls” or “boys.” 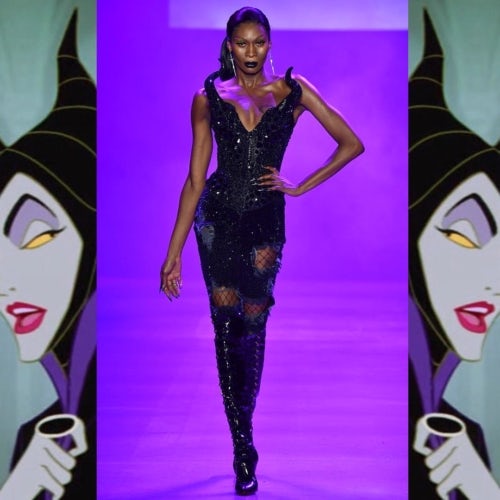 “Snow White’s Evil Queen was inspired by the femme fatales of 1930’s cinema,” says Obstbaum, noting their unapologetic beauty made them “seem dangerous, when really, they were just powerful in a different way.”

Disney’s courting of the LGBTQ community dates back at least as far as the first “Gay Day” in 1991. Since 1995, the company has extended health benefits to the same-sex partners of its employees.

In this way, Disney surprisingly mirrors the more risqué tribes of fashion — think Savage x Fenty’s pregnant Slick Woods, Prabal Gurung’s trans bombshells and Moschino’s embrace of drag queen Aquaria as a recent brand muse. But also like in the fashion industry, Disney’s efforts to embrace muses of color has been somewhat delayed, especially in the Disney Princess canon.

To date, there is only one black Disney Princess—Tiana, from The Princess and the Frog—though other arms of the brand, like Star Wars, Disney Junior, and of course Marvel Comics (in particular, Black Panther) have included more heroes of color.

“If I could tell Disney to do one thing differently,” Fitzsimons says, “It would be to accelerate their progression of inclusion. Young people today don’t just want brands to look like they do; they expect it. They require it.”

“Find the Fun and Snap, the Job’s a Game” – Turning Shopping to Obsession

Like Mickey Mouse himself, one of Disney’s branding tactics is both small and huge. It’s the little ways they gamify their public spaces, creating excitement and embedding brand identity into the brain far after the Disney experience ends.

The most pervasive example is “Hidden Mickey,” a game that runs through all Disney properties and challenges visitors to spot tiny Mickey Mouse silhouettes everywhere — including on sidewalks, ride lines, public seating areas, and (of course) inside retail locations themselves.

Like spotting Riccardo Tisci’s new Burberry logo on inflatable teddy bears around the world, or playing Knowlita’s grab-a-toy arcade game at pop up locations like Ludlow House, searching for Disney’s hidden Easter eggs keep the label’s identity on the brain well beyond a store visit.

Another teachable moment: how Disney uses social media as a magic mirror with fans, broadcasting their own news and views while keeping watch on their thoughts, feelings and spending patterns.

When our fans are getting excited about a particular theme, we’re able to pivot into that.

“We have the Disney Digital Network keeping their finger on the pulse of [online] conversations on an hourly basis,” said Obstbaum, referencing the sprawling content network that claims over 300 individual sites including Oh My Disney and Babble, and a combined billion social media followers. “When our fans are getting excited about a particular theme, we’re able to pivot into that.”

And They All Lived Happily Ever After…

To be sure, the worlds of fashion and Disney differ drastically in one key way: Disney creates stories before making merchandise; by necessity, fashion does the opposite.

Still, there’s much to be learned from the most lucratively licensed brand in the world, especially about infusing and cultivating a thread of emotion — or as Silverman calls it, “spirit,” — into products. When brands find the intersection of adult creativity and childhood wonder, that power can be harnessed like Buzz Lightyear’s jetpack, ready to take a fashion label to infinity and beyond — or at least to enduring brand loyalty and spiking sales.

In other words, the ultimate happy ending.

BoF and Disney on The Power of Storytelling in Fashion

Do Fashion Collaborations Need a Revamp?