There was one tie-up missing though: there was no news on its new head designer.

Add in holiday sales growth that missed analyst consensus expectations and it looks like Burberry has continued its unfortunate habit of setting the wrong trend: the shares fell about 7.5 percent.

With current creative director Christopher Bailey on his way out, Marco Gobbetti, Burberry’s new chief executive, has been laying the foundations for his replacement. In November he outlined plans for taking the company “firmly” into the top-end luxury space, sending the shares down the most in five years in the process.

Its third-quarter trading update on Wednesday was never going to be the “it” item in its collection. But with disappointing same-store sales growth, the creative director vacancy unfilled and Gobbetti’s strategy in its early days, Burberry is lost in a fashion wilderness. 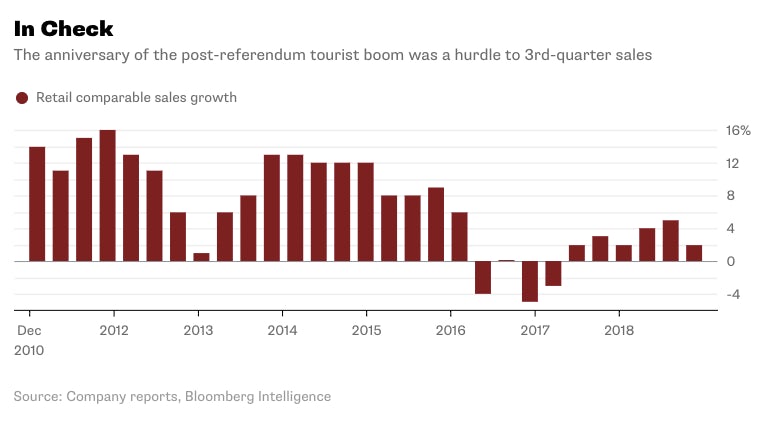 What’s more, the post-Brexit boost from tourists flocking to the U.K. to take advantage of the weak pound, which has buoyed Burberry for the past 18 months, appears to be fizzling out. Now add in that the broader luxury outlook could become more challenging, as the recovery in Chinese spending, that has turbo-charged the market for the past year, also eases.

The shares are down more than 15 percent since Gobbetti unveiled his new strategy. That promised a step-up in capital expenditure, but flat sales and profits over the next two years, so will take a while to have any impact.

They trade on a forward price to earnings ratio of about 20 times, at a discount to the Bloomberg Intelligence luxury peer group.

If Gobbetti succeeds in recruiting a top-notch creative director to re-energise the Burberry brand — outgoing Celine designer Phoebe Philo is one of the favourites — he has a good chance of returning Burberry to its historical premium to the index. After the phenomenal revival of Kering-owned Gucci, investors are clamouring for the next luxury turnaround story.

Without a strong appointment, though, it’s hard to see what would lift the current lacklustre performance and valuation.

With Burberry one of the few luxury groups unencumbered by a controlling shareholder, and an activist on the register, if Gobbetti can’t find the right creative fit with his strategic vision, someone else might try to do it for him.

He had better hope he has a more high-profile collaboration to announce next time he updates investors.