NEW YORK, United States — It is time to address the gaping lack of data on the role played by hundreds of thousands of homeworkers who stitch and embroider our clothes, dye our fabrics and perform countless other tasks vital to the fashion supply chain.

The “handworker economy” accounts for a significant portion of the informal work that supports the global fashion industry. Just how much is one of many unknowns: data collected in 2001 estimated that 300 million homeworkers were employed in the developing world, half of whom are women. But the numbers, aside from being nearly two decades old, don’t go much further than that. They don’t include a breakdown of how this work is divided by geography or production type. Wildly variable statistics — like those citing that 20 to 60 percent of garment production is performed in homes — add little clarity, painting a picture of a handworker economy that, while difficult to pin down, is universally agreed upon to be much larger than estimates are telling us.

This fuzziness presents challenges to brands that are increasingly working to build responsible and transparent supply chains, but are afraid of the risks of an unmapped workforce. It poses roadblocks for philanthropists seeking opportunities to fund women’s development initiatives, because they are limited in their means to quantify potential impact. And most of all, it creates major problems for artisans and handworkers themselves who are seeking fair wages, appropriate working conditions and the validation they deserve as critical contributors to the global economy.

If as many women as men took part in the formal economy, $28 trillion would be added to the global GDP.

Who suffers most from lack of data?

It tends to be the world’s most marginalised and hidden groups, those living and working in communities in which ineffective government regulation and poor infrastructure make data collection efforts either unreliable or nonexistent. It tends to be workers participating in the so-called “informal economy” where paid piece-rate, cash-based wages leave little paper trail to accurately track and account for labour. It tends to be home-based workers whose contributions to today’s supply chains have historically lived outside the reach of standards and audits designed to regulate factory-based production.

Women and the informal economy are inextricably intertwined, and as long as data on the sector remains incomplete, women will be misrepresented and underutilised.

Nest is uniquely positioned to gain deeper visibility into the world of handwork through our Artisan Guild network, which now reaches close to 500 businesses across more than 90 countries, touching more than 160,000 individuals. While stereotypes about global artisan production may lead us to think of small-to-medium-sized, craft-based businesses as unsophisticated, hyper-localised or catered largely to a tourist market, Nest’s data shows the opposite. Almost all (90 percent) of artisan businesses in the Nest Guild are engaging in at least some level of export and most indicate that international wholesale accounts — not local markets — are their most common sales channels.

The artisan economy is becoming increasingly globalised, and technological advancements are play a role in building this interconnectivity. Nearly all (97 percent) of Nest Guild businesses use email, 78 percent are on Facebook and 67 percent are on Instagram. While social media is creating a more inclusive global economy that stands to benefit resource-constrained businesses using decentralised, cottage industry-style production models, there is room for technology to unlock even greater economic potential for the handworker workforce. CRM software, accounting software and Google suite tools, for example, are rarely used.

As the pool of sophisticated artisan businesses capable of exporting continues to grow, there needs to be a community of brands on the other end who are interested in sourcing hand-crafted products. Data would seem to indicate that the market for handcrafted goods is growing. Research and Markets released a report indicating that the global handicrafts market reached $526.5 billion in 2017 and is expected to reach $984.8 billion by 2023.

In a recent survey that Nest conducted in partnership with the Council of Fashion Designers of America, most designers reported that they are already sourcing from between one and five artisan vendors and 75 percent reported that they would like to expand their sourcing from artisans, noting a particular interest in handwork coming out of the United States and citing knitting, crochet and macramé as craft techniques of greatest interest.

For brands and designers to act upon this interest, they must be able to tackle perceived risks that are commonly associated with homework. While we know that aspects of production (typically embellishments such as embroidery and beading) leave the factory, flowing through subcontractors to workers in their home, it is unclear just how big a role home-based handworkers play in today’s supply chains. And until recently, brands have had few resources for extending transparency beyond the factory to begin quantifying this complex, decentralised workforce.

Craft-based work is the second largest employer of women in rural and developing economies.

According to a sequence of surveys issued by Nest alongside GLG (Gerson Lehrman Group), most brands are using standards set by own their own businesses to assess home or small workshop-based work, pointing to a lack of external verification for this type of work. 18 percent of brands use factory audits to assess home or small workshop-based work. Factory audits are often highly inapplicable to the home-based setting where, for example, having multiple fire extinguishers, doesn’t make sense. Only 4 percent of brands report that they are always conducting home visits when it comes to assessing work beyond the factory, so very few are getting complete transparency to the individuals in their homes who are performing handwork.

On December 7 at the United Nations, Nest, in the company of brand and artisan partners, officially launched the Nest Standards for Homes and Small Workshops and the Nest Seal of Ethical Handcraft. The program is working towards industry-wide transparency and compliance for production taking place beyond the four-walled factory. Since the program’s launch, 13 artisan businesses have completed Nest’s compliance program, moving them on a path towards greater transparency and improved ability to ensure worker rights and wellbeing. Six artisan businesses have become Nest Certified, earning access to the Nest Seal. 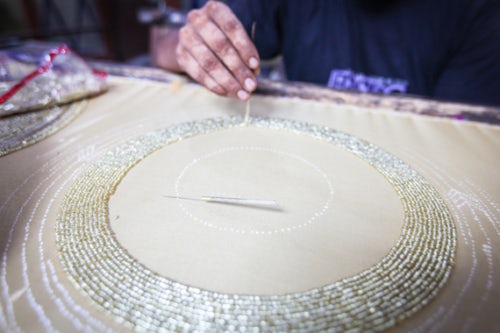 Why is it so important for us to begin quantifying the challenges and opportunities for both brands and artisan businesses to work together?

Craft-based work is the second largest employer of women in rural and developing economies. Its unique ability to be done from home means that craft can be an income-generating activity for women limited in their ability to work outside the home due to safety concerns, patriarchal systems and demands of family care.

According to Nest’s worker wellbeing surveys, an artisan woman’s preference to work in a home or small workshop is predominantly driven by childcare. More than a quarter of women interviewed had quit previous factory jobs to do craft-based work from a home or workshop, and more than one-third cited caring for their children as the primary reason for doing so. These findings confirm Nest’s understanding of craft’s ability to be done from home as highly unique and important when considering the realities of women’s work around the world.

When women work, they invest 90 percent of their income back into their families, compared with 35 percent for men. McKinsey Global Institute estimates that if as many women as men took part in the formal economy, $28 trillion would be added to the global GDP. Nest’s worker wellbeing surveys found that 40 percent of women primarily use the income they earn from craftwork on furthering their children’s education.

The data Nest has begun to collect and to share in our first State of the Handworker Economy Report are significant not only to Nest as a means to inform our programs, but also to brands seeking to increasingly source ethically produced handcraft; artisan businesses working to ensure improved rights and wellbeing for home-based workers; philanthropists keen to drive economic development for women; and most importantly to handworkers themselves.

Rebecca Van Bergen is the founder and executive director of Nest, a nonprofit organisation building a new handworker economy to connect craftspeople, brands and consumers in a circular and human-centric value chain.

The Nest State of the Handworker Economy Report was made possible with funding from Bloomberg Philanthropies, a philanthropic supporter of the Nest organisation.