Markets are in turmoil, but the diamond-studded luxury goods juggernaut shows no signs of slowing down. Shoppers are snapping up Louis Vuitton handbags and Gucci loafers. Even the hard-hit watch market is showing signs of revival.

It might be tempting to embark on some M&A, given how sales and shares of European megabrands such as LVMH Louis Vuitton Moet Hennessy SE and Kering SA have held up. Michael Kors Holdings Ltd. and Tapestry Inc. (formerly known as Coach) both want to turn themselves into luxury powerhouses.

But they should all be patient. Bernard Arnault, LVMH’s chairman and chief executive, reckons firms would be better off waiting for the next crisis before swooping. He’s right. Nobody wants to pay full price for a closet full of luxury brands.

Yet that’s just what shareholders are paying: the Bloomberg Industries Global Luxury Competitive Peers index traded at about 22 times estimated earnings at the end of 2017 — a near 14-year high.

Burberry Plc, Hugo Boss AG and Tiffany & Co., are far from bargains — even if their turnarounds are, so far, incomplete. Other natural targets, such as Salvatore Ferragamo SpA, Tod’s SpA and Prada SpA have sizeable family shareholdings. Those would expect a healthy premium to exit, even if the brands are under-performing. 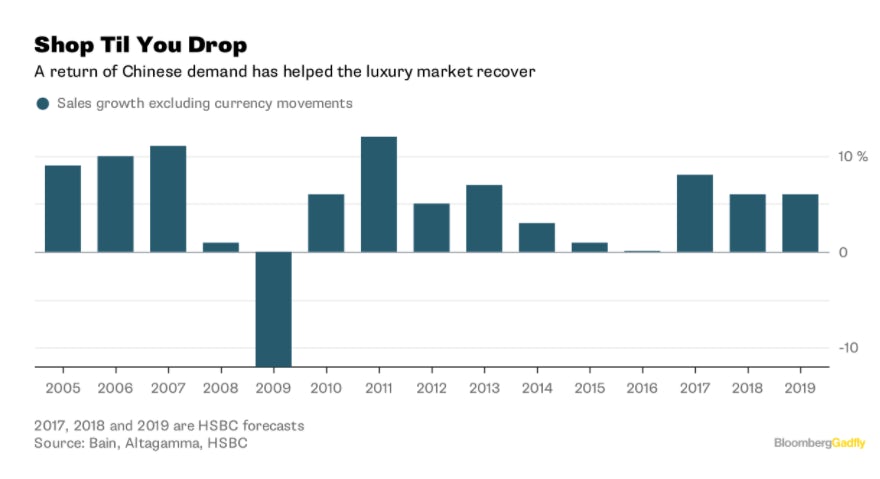 Those valuations, though, could come under pressure in time. Much of the revival in demand over the past 18 months has come from China. Some of the rebound was simply catch-up after a couple of lean years, so it’s possible that will start to moderate again. The strong euro could start to deter tourists from visiting the region and splashing out. Recent market jitters could morph into a broader sell-off. That might be cushioned by US tax cuts, but could still make even affluent shoppers feel more nervous.

Both LVMH and Kering can afford to wait for the stars to align. They are well represented in fashion and leather goods, but have room to grow in the fast-expanding jewellery industry. Tapestry and Kors have stated their aim is expansion, but, aside from valuations, there are good reasons to hold fire. Tapestry acquired Kate Spade for $2.4 billion last year, and another acquisition in the short term would put a strain on its balance sheet. Kors is still digesting its $1.2 billion takeover of Jimmy Choo last year. 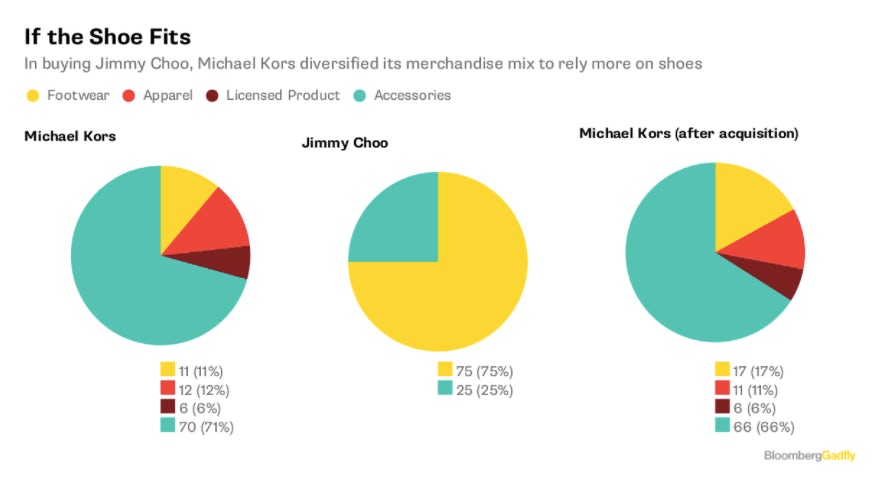 The two must decide whether to stay in the handbag and accessories wheelhouse, or add some apparel to the mix, creating new competencies and some insulation against the fickle winds of fashion. Tapestry, for one, is likely to look outside of the US, and possibly outside of leather goods, for its next purchase. It has eyed Burberry in the past, and another European group might suit it.

But whatever they covet, they shouldn’t let impatience steer them. Better stick to window shopping for now.