LONDON, United Kingdom — The juggernauts of the sportswear sector are suddenly looking vulnerable as a host of new brands, hawking everything from vintage-inspired athletic shoes to designer eyewear made for running, crowd the market.

VF Corp.’s acquisition of running shoe brand Altra in March could be the first in a wave of deals where some sportswear giants aim to gain their second wind and attract millennials by snapping up fast-growing young upstarts.

Growth in the $330 billion activewear market is slowing, with sales expected to rise by 6 to 7 percent this year, from 7.5 to 8.5 percent in 2017, according to BoF and McKinsey & Company‘s State of Fashion 2018 report. That’s bad news for mega-brands like Nike and Under Armour, which are facing challenges designing apparel and footwear that appeal to younger customers.

Meanwhile, athletic apparel retailers like Lululemon, Athleta and Sweaty Betty have found success by following a different path, using a combination of winning products and lifestyle branding to cultivate loyal followings among millennials. Behind them, niche activewear brands are trying to carve out communities of their own.

“Community is something the consumer is really looking for,” said Matt Powell, vice president and senior industry advisor for the NPD Group. “The consumer is [also] looking for unique products and these small brands obviously offer that.”

Not all firms are following the same course as VF Corp. Some large companies are retooling their design and supply chain processes to deliver a constant stream of new sportswear products, which tend to be more technically difficult and costly to create than other types of fashion. Notably, Adidas Group, which has enjoyed success with millennials, has said they are not interested in acquiring smaller rivals.

But for many big sportswear brands, acquiring small but rapidly expanding labels may be a way to revive flagging growth. These start-ups come with loyal communities of customers, typically built cheaply via word-of-mouth, social media and events. They also appeal to retailers looking for unique brands to differentiate their offerings from competitors.

So, which emerging activewear brands should sportswear giants and potential investors keep an eye on? BoF conducted its own internal research and analysis, and spoke with a number of industry experts, to identify the top 10 M&A targets in activewear.

Over the past five years, Outdoor Voices founder and Parsons-alumni Tyler Haney has become the poster child of the modern athleisure movement. Finding a sweet spot between performance and design, Outdoor Voices more than doubled its direct-to-consumer business each year, mainly through word-of-mouth.

“We wanted to create product that functions in the same way as that of Nike and Lululemon, but is more aesthetically aligned with what I wear day-to-day, like Acne and A.P.C.,” Haney told BoF.

In 2016, the brand received $13 million in funding led by investors including General Catalyst Partners and Forerunner Ventures, and opened six stores in the US, with a fifth planned in Boston later this year. A collaboration with A.P.C. (A.P.C. founder Jean Touitou is also an investor in Outdoor Voices) further expanded the activewear brand’s exposure. Its latest $34 million Series C funding round in March 2018 will enable the company to invest further in fabric innovations and product development, as well as allow it to launch a virtual kit shop to create custom outfits (70 percent of the brand’s sales are currently online).

APL
Founded in 2009
Estimated Funding: None

Ever since twin brothers Adam and Ryan Goldston founded California-based Athletic Propulsion Lab (APL) from their dorm rooms in 2009, the sneaker upstart has seen rapid growth. Launching with a range of men’s basketball sneakers — one of which was the first shoe to be banned by the NBA for allegedly giving athletes an unfair competitive advantage — it wasn’t until 2015 that the business hit mainstream popularity when it was stocked by Net-a-Porter.

While APL’s most affordable and popular models range from $140 to $160, their shoes have an atypical aesthetic and high-profile clientele, including the Kardashian-Jenners. The company has bypassed key sports points-of-sale, such as Foot Locker, and attracted the attention of 300 prominent stockists, including Bergdorf Goodman and Selfridges as well as Lululemon, with whom APL also co-designed sneakers with.

Today, the company remains solely owned by the Goldstons, and while it does not disclose financials, APL says its revenue has tripled each year since it introduced women’s shoes in 2014. The brand has ambitions to reach $1 billion in revenue with less than 40 employees.

When fashion veterans Tom Daly and Max Vallot quit their jobs at Acne Studios and Saint Laurent, respectively, to start New York-based eyewear label District Vision, the two launched a brand that creates more than just appealing product. Instead, District Vision, which targets runners with its performance-driven eyewear — handmade in Japan — has retained current customers and attracted new ones through its free guided yoga and meditation sessions, which it stages ahead of marathons. Potential buyers could use the expertise of District Vision’s founders, as well as its enthusiastic community, as a tool to become less faceless.

“It was the community of curious runners in New York that inspired us to start the brand in the first place and we continue to develop our toolkit to serve their needs,” Vallot told BoF. With its community-driven approach, District Vision’s revenue has grown 120 percent between 2017 and 2018 of which 50 percent is derived from direct-to-consumer sales. The brand is currently also available at over 100 stockists, including Dover Street Market, Lane Crawford and Barneys New York. This year, District Vision will launch a wearable tech project as well as “several major collaborations, including technical footwear.”

Embracing the idea of multi-wear fashion, Australian designers Pip Edwards and Claire Tregoning set out to create a fully-fledged activewear line that blends sport and daily life. The right endorsement from celebrities such as Olivia Palermo, Bella Hadid and Ruby Rose has contributed to the brand’s meteoric rise. Today, P.E. Nation is available from Selfridges to Kith and has experienced triple-digit revenue growth for the past three years. Earlier this year, the company expanded the scope of its business by venturing into menswear as well as launching capsule collections zooming in on boxing, yoga, swimming and denim.

The buzzy Seattled-based athletic and leisurewear label, launched by husband-and-wife duo Quang and Ellie Dinh, has garnered approval from consumers for its subtle monotone colourways, and its environmentally and socially responsible take on athleisure.

Launching as a direct-to-consumer business has helped Girlfriend Collective create a direct line of communication with its 100,000 Instagram followers, with whom it celebrates diversity and body positivity and is transparent about its supply-chain practises — something that is atypical of athletic brands, yet in-line with the values of its millennial and Gen-Z customers. “We still rely on word-of-mouth as a channel for growth, especially because our brand has so much to say about how our product is made and who we make it for,” said Quang Dinh, who projects revenues in 2018 will grow 100 percent compared to the year prior. 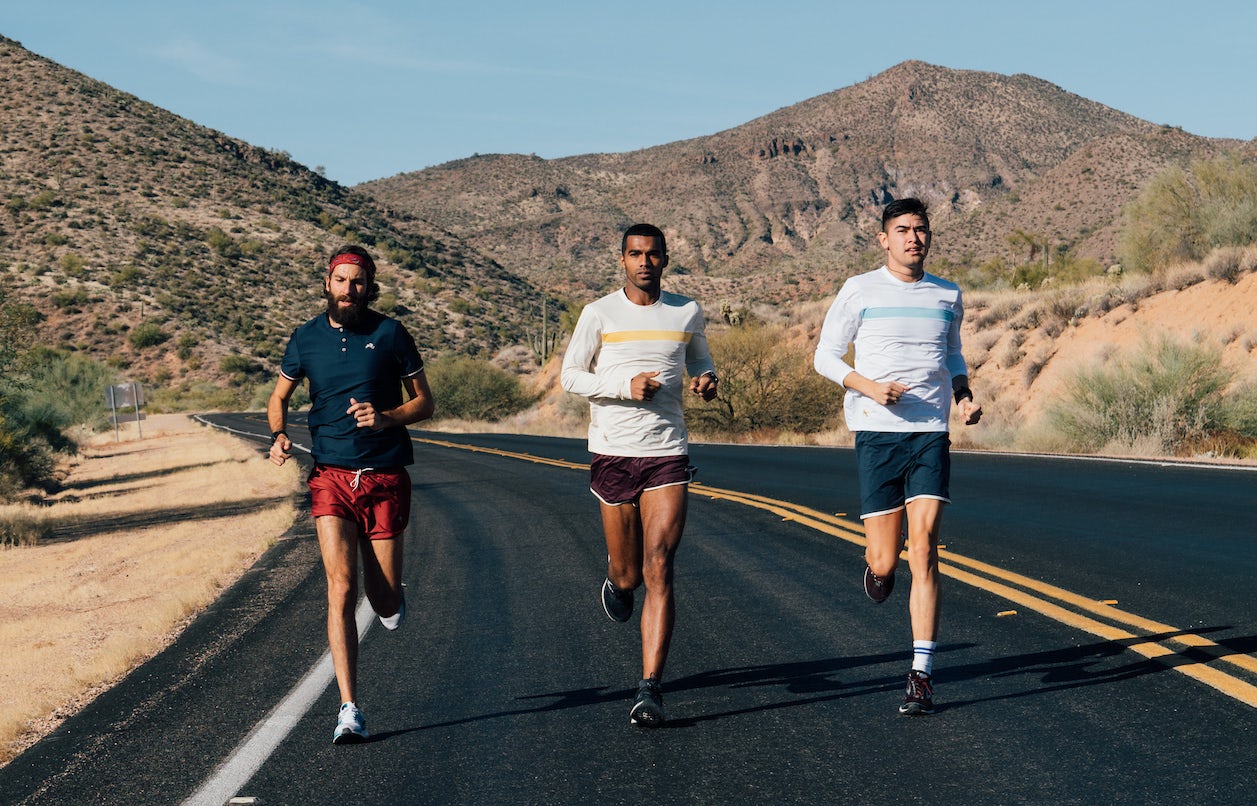 With its vintage, Ivy League aesthetic, running apparel brand Tracksmith has gained popularity among a rising number of running-devotees that sit between beginning and professional runners. Founded by Matt Taylor and Luke Scheybeler — also co-founder of cycling brand Rapha — the Boston-based, venture-backed start-up was born online as a direct-to-consumer business. Last year, Tracksmith grew its revenue by more than 120 percent and is on pace to exceed that for 2018. Now, with $5.7 million in funding under its belt, Tracksmith is looking to grow its content-commerce business to engage more frequently with customers, as well as expand its women’s business, which makes up over 30 percent of sales. Moreover, the brand is eyeing international expansion as currently less than 15 percent of sales come from abroad.

Launched by Katie Warner Johnson and Caroline Gogolak as a curated online destination for women’s luxury activewear, Carbon38 quickly found traction selling brands including Nike, Adidas by Stella McCartney and P.E. Nation to its loyal fitness and fashion following. A namesake in-house label that bridges the gap between activewear and fashionable ready-to-wear followed in 2015 to sustain its 500 percent revenue growth that year. The line currently makes up less than 10 percent of total sales. In January 2018, Foot Locker made a $15 million strategic investment in Carbon38. The Series A round brought the total raised by the retailer to $26 million since 2013. “I do think in the next five years being a $100 million-plus business is entirely possible,” Gogolak told BoF in 2016.

In response to what they saw as a lack of niche athletic labels in the market catering specifically to men, ex-NFL employee Nate Checketss and Kyle McClure, a former NCAA lacrosse player, founded Rhone. The brand differentiates itself from the premium men’s lines of competitors such as Nike, Under Armour and Lululemon by being less logo-heavy in its product design. Today, it is sold at over 175 specialty stores and gyms worldwide. The formula has resulted in Rhone experiencing tremendous growth since inception with revenue having doubled annually, and is expected to more than double in the next year. Next to a $5 million Series A round, Rhone received a “significant investment” from L Catterton, the consumer-focused private equity firm whose shareholders include LVMH and Groupe Arnault, in March 2017.

Spending her time between New York and Hawaii, it was while practising yoga daily that Australian designer and former model Jodhi Meares came up with the concept for the contemporary activewear label. With The Upside, the television host and founder of popular swimwear company Tigerlily, has found rapid success. The label, known for its printed leggings and logoed sweatshirts, has become a bestseller in the activewear category at MatchesFashion, Net-a-Porter and Lane Crawford and is often sported by the likes of models Karlie Kloss, Hailey Baldwin and Rosie Huntington-Whiteley. The brand currently has three stores in Australia and has launched swimwear as well as a dedicated menswear line.

Founded by Nadine-Isabelle Baier and Arendt van Deyk, the German minimalist activewear label set itself apart from its peers by focusing on the highest quality eco-friendly fabrics, which it sources from Switzerland, Italy and New Zealand, and are targeted towards the luxury shopper. In 2017, the brand expanded into wholesale and enlisted Canadian designer Steven Tai to design its second collection, which helped reach new audiences.

The Top 10 M&A Targets in Streetwear

The Top 15 M&A Targets in Beauty