H&M offended shoppers
when a children’s hoodie emblazoned with the phrase “coolest monkey in the jungle” was modelled in marketing materials by a young black boy | Source: Courtesy

NEW YORK, United States — Every once in a while, tucked into the stream of speedily made garments rushed into stores, designs with shockingly bad taste stand out: a shirt comparing women to dogs at Topman, symbols of the Holocaust on a top at Zara, a slogan that trivialises sexual consent on a piece at Forever 21, or words like “slave” and “slut” used as decorative details on T-shirts at ASOS and Missguided.

Brands, even as they offer mea culpas, rarely explain how such blunders come to pass. But problematic designs seem to repeatedly slip past layers of buyers, designers, stylists, marketers and managers before being caught by consumers.

Retail experts blame a heated competitive environment, where companies, many of them based in Europe, are spread thin trying to cater to a global customer base that is easily bored, is extremely demanding and can buy almost anything via e-commerce. Many brands develop a cavalier attitude: churn out products now, ask forgiveness later.

But with easy access to social media, shoppers are increasingly aware of — and vocal about — cultural appropriation, derogatory messaging and insensitive references. In response, several retailers say that they are beefing up the approval process for designs and investing in digital screening technologies.

Earlier this year, H&M, one of the largest clothing retailers in the world and a repeat offender, was taken to task over a children’s hoodie emblazoned with the phrase “coolest monkey in the jungle” and modelled in marketing materials by a young black boy. The description, which has been used to dehumanise black people, set off protests at South African stores that left mannequins toppled and racks overturned.

In the aftermath, H&M chose a lawyer and company insider, Annie Wu, to lead a new four-person team at its Stockholm headquarters focused on global diversity and inclusiveness.

“We want to be held accountable,” she said this week in her first interview since taking the job.

“We didn’t recognise that in this now new age of transparency,” she added, “what the brand stands for is super important to people.”

Fast fashion companies, which specialise in low-priced, quickly produced clothing and have grown faster than the apparel industry as a whole for years, are under pressure to be more prolific and provocative as they sell across more borders.

Zara said it produces 20,000 designs each year, 98 percent of them created in-house, all sent through multiple reviews before being offered for sale. But some of the outsourced designs have proved problematic. 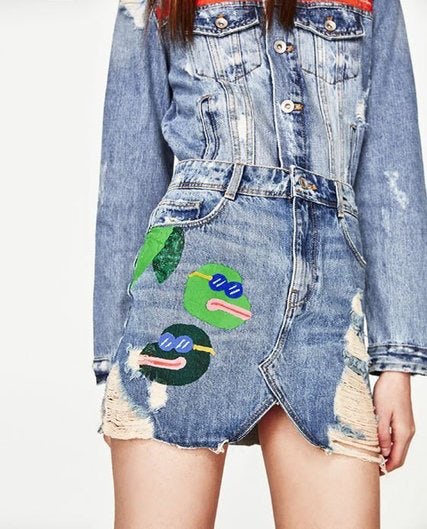 When fashion is contracted out, “there’s a lot less control, a lot less oversight and involvement from the company along every step of the process,” said Felipe Caro, a business professor at the University of California, Los Angeles, who has spent years studying Zara.

Last year, critics complained that images of frogs on a Zara skirt resembled a cartoon character called Pepe, which was designated a hate symbol of the alt-right by the Anti-Defamation League.

The skirt was designed by an independent Spanish artist based in London. In a statement at the time, he said that the frogs had “no connection at all with anything related to hate, violence or discrimination.”

Ricardo Cavolo, another artist who designed for the same collection, said in an email that the design process “was pretty fast.” He spent two days at Zara’s headquarters in Spain, creating paintings on denim that the company then reproduced without making any suggestions or changes, he said.

Supply chain experts urge more careful, decentralised vetting procedures that send designs through a central checkpoint at headquarters and also past gatekeepers in the country of sale.

Soon after shifting into her new role at H&M, Ms. Wu said, she visited South Africa, where the importance of soliciting local input quickly became clear.

“I thought I was very culturally aware,” said Ms. Wu, who was born in Taiwan, grew up in New York and speaks Mandarin. “I learned so much more just by being in that office.”

A few months ago, during a long day spent styling and photographing products for H&M’s website, no one on the Stockholm set appeared to raise concerns about one more item to process, the hoodie with the offensive message, according to a person familiar with the shoot.

Critics said the garment might have been flagged if H&M’s team was more diverse.

“It’s so easy to avoid this kind of controversy,” said Angel Sinclair, the founder of the advocacy group Models of Diversity. “If you care about being culturally sensitive, just be more culturally inclusive of talent and managers in the business.”

It’s so easy to avoid this kind of controversy. If you care about being culturally sensitive, just be more culturally inclusive of talent in the business.

H&M has more than 100,000 workers worldwide. But the fashion giant’s board is entirely white. And retail experts said that much of the creative process takes place in and around its European home office, handled by young employees who are often oblivious to societal sensitivities in markets oceans away.

Ms. Wu, who reports directly to H&M’s chief executive, Karl-Johan Persson, said she did not know the ethnic or racial backgrounds of the employees and contractors involved with the monkey hoodie. But an internal investigation of the incident — which she declined to discuss in detail — showed “how important awareness-raising is generally,” she said.

“There are hundreds of steps of getting a product to market — it’s never one point in time where we can say, ‘It’s your fault,’ because there are teams at work on things, there are approval processes throughout,” she said. “It’s really hard to pinpoint when.”

A Need for Speed

H&M and Zara used to stun the industry with their ability to move garments from design to store floor within weeks, when other retailers required more than half a year. But some brands can now perform the same feat much faster, while others, like Amazon and Adidas, are experimenting with on-demand manufacturing.

ASOS, an online fashion retailer, adds 4,500 new products to its website each week, according to a recent report from the Fung Global Retail & Technology research firm.

H&M, which has suffered a string of gloomy earnings reports and said this week that it is sitting on $4.3 billion in unsold goods, plans to invest in its supply chain to make it “faster, more flexible and more responsive.”

“This is a low-tech, low-profit, low-growth industry that is being turned upside down,” said John S. Thorbeck, an expert on retail supply chains. “Each of these companies would rather get something as rapidly to market as possible and retract a mistake.”

“When you have two hours to approve a line versus two months, things go unnoticed,” he said.

Fast fashion has produced tone-deaf products for more than a decade, passing them off as a rounding error given the enormous volume of items the companies generate each year.

But more shoppers have begun calling on retailers to take a stand on social and political issues, such as sexism and gun control.

“These incidents are happening in a climate where marginalised communities are feeling more targeted, more under attack, so they’re more in tune with these issues,” said Melissa Garlick, a lawyer with the Anti-Defamation League. “Fashion companies have a responsibility to the public and to consumers to ensure that they’re being sensitive in designing and marketing products — they have to be aware of what lines not to cross.”

These incidents are happening in a climate where marginalised communities are feeling more targeted, so they’re more in tune with these issues.

Several companies have pledged to diversify hiring, retool corporate guidelines and initiate other measures to prevent mistakes from going out the door.

Zara now uses an algorithm created to scan designs for insensitive or offensive features. In 2016, it hired a committee of diversity officers. Diversity and inclusion training has become mandatory for all new employees.

At H&M, Ms. Wu said she was organising workshops to help employees recognise unconscious bias and was also reaching out to anti-racism groups and other organisations. In North America, H&M is planning to hire a New York-based diversity manager.

Ms. Wu’s first two months on the job have yielded commitment from executives but, so far, few specific measures. She acknowledged that raising awareness is not “the Band-Aid” that can fix all of H&M’s problems.

“We are a very large corporation, and mistakes do happen,” she said. “It starts with us scrutinising all of these different processes.”

The Cautionary Tale of H&M and Digital Disruption