Watches of Switzerland Plans a US Invasion | Intelligence, BoF Professional

LONDON, United Kingdom — Competing with the luxury watch stores of Bond Street and major department store players like Selfridges and Harrods is no easy feat. But tucked between a J. Crew and Maje on London’s Regent Street is the biggest seller of Rolexes in the country: Watches of Switzerland.

“Your whole store has to look like an expression of wonderment,” says chief executive Brian Duffy of the store’s glossy shop-in-shops selling Rolex, alongside other high-end brands like IWC, Cartier, Tag Heuer, Omega, Breitling and Patek Philippe. “Today’s high-net worth, global consumer wants to be in a modern environment in which they can freely browse, quickly understand what’s being presented to them, happily walk between the brands, ask for help if they want and feel free to walk the store unencumbered.” It’s a contrast to the traditional model of luxury shopping streets, little price transparency and direct selling behind closed doors.

Duffy, a bearded Scotsman in a three-piece suit and £21,500 ($27,105) Audemars Piguet Royal Oak steel chronograph blue dial watch on his wrist, has spent close to £55 million remodelling stores with cocktail bars, event spaces and fit-outs that allow shoppers to walk in and out of an arcade of shop-in-shops with soft furnishings and glossy glass counters. He was brought in by Watches of Switzerland owner Apollo Global Management in 2014 to modernise the shopping experience after years of “underinvestment” by former owner Baugur, which collapsed when Icelandic lender Lansbanki called in its debt. He has also launched e-commerce, repositioned their jewellery brands Mappin & Webb and Goldsmiths more upmarket and invested in new systems like live stock availability that helps 30 percent of store sales comes from non-store stock, couriered in from nearby stores while buyers have a champagne.

Inside a Watches of Switzerland store | Source: Courtesy

Today, Watches of Switzerland holds 34 percent of the market in the UK with 105 stores in big shopping districts, and plans to largely repeat the formula in the US. It’s also aiming to lure potential investors after an exit attempt by private equity owner Apollo Global Management failed eighteen months ago.

Investors baulked at the valuations because the US plan was an ambition rather than a reality and there was uncertainty on how much UK growth was just tourists taking advantage of the weak pound amid Brexit, rather than a long-term trend. Last year, sales climbed 21.2 percent to £685.2 million ($864.1 million) in the year to the end of April. The business has recently released figures to bondholders showing first-half sales climbed 30 percent to £384 million driven by luxury watch sales and higher average transactions.

Earlier this year, Sky News reported the business had hired Goldman Sachs and Barclays to arrange an initial public offering in London, with a valuation of around £600 million ($756 million). Apollo didn’t respond to requests for comment.

“They’ve owned us for over five years, they’re private equity so it’s not surprise they would look to liquidate. We are part of a fund that is largely liquidated,” Duffy says, adding they are a “good candidate for a public market, we’d have low debt leverage, the nature of this business would sit more comfortably with our branded partners and its more of a long-term business, but nothing has been decided,” especially with Brexit volatility. Watchshop and Watch Lab, whose average price point is below £500, would not be included in the possible IPO, he said. Trading conditions in that segment have struggled, falling 23.2 percent in the second quarter.

Your whole store has to look like an expression of wonderment.

One part of a potential listing will be convincing investors of its US ambitions, even with early growth. Last year they bought Mayor’s 14 stores for $104.6 million which they have since rebranded and bought online, as well as the rights to retail in Wynn Resort in Las Vegas. They have also opened their own Watches of Switzerland store in New York’s Soho last month. The business also runs monobrand stores for brands including Rolex, Omega, Breitling and Tag Heuer.

But European multi-brand rival Bucherer is also eyeing the untapped potential of the $3.1 billion US market with the purchase of market leader Tourneau in January which is also being refitted, while Wempe is already there and jewellery market leader Tiffany also sell watches.

Still, the US is a very fragmented market, with more than half taken up by independent “mom and pop” shops that may struggle to compete with big budget stores like the new 8,000-square foot Soho store in an ironworks building with a curated library of collectible watch books, an in-house cocktail bar by Death & Co, and revolving pop-ups of limited editions from vintage dealer Analog Shifts to one-offs like a Grand Seiko mechanical watch. A second location in Hudson Yards is planned for March along with another in the New Jersey shopping complex American Dream Meadowlands.

The US luxury watch market is estimated to be only 1.7 times the UK market, the company estimates from market data, surprisingly small relative to the country’s population and wealth. “Watches appeal to the American psyche. Its rational indulgence. It keeps its value. You’re buying a product that [has] a liquid market that you can sell on, you’re buying a family heirloom, a status symbol that appeals to the American psyche, so we’re convinced this is suppression of the market from a lack of retail,” said Duffy. 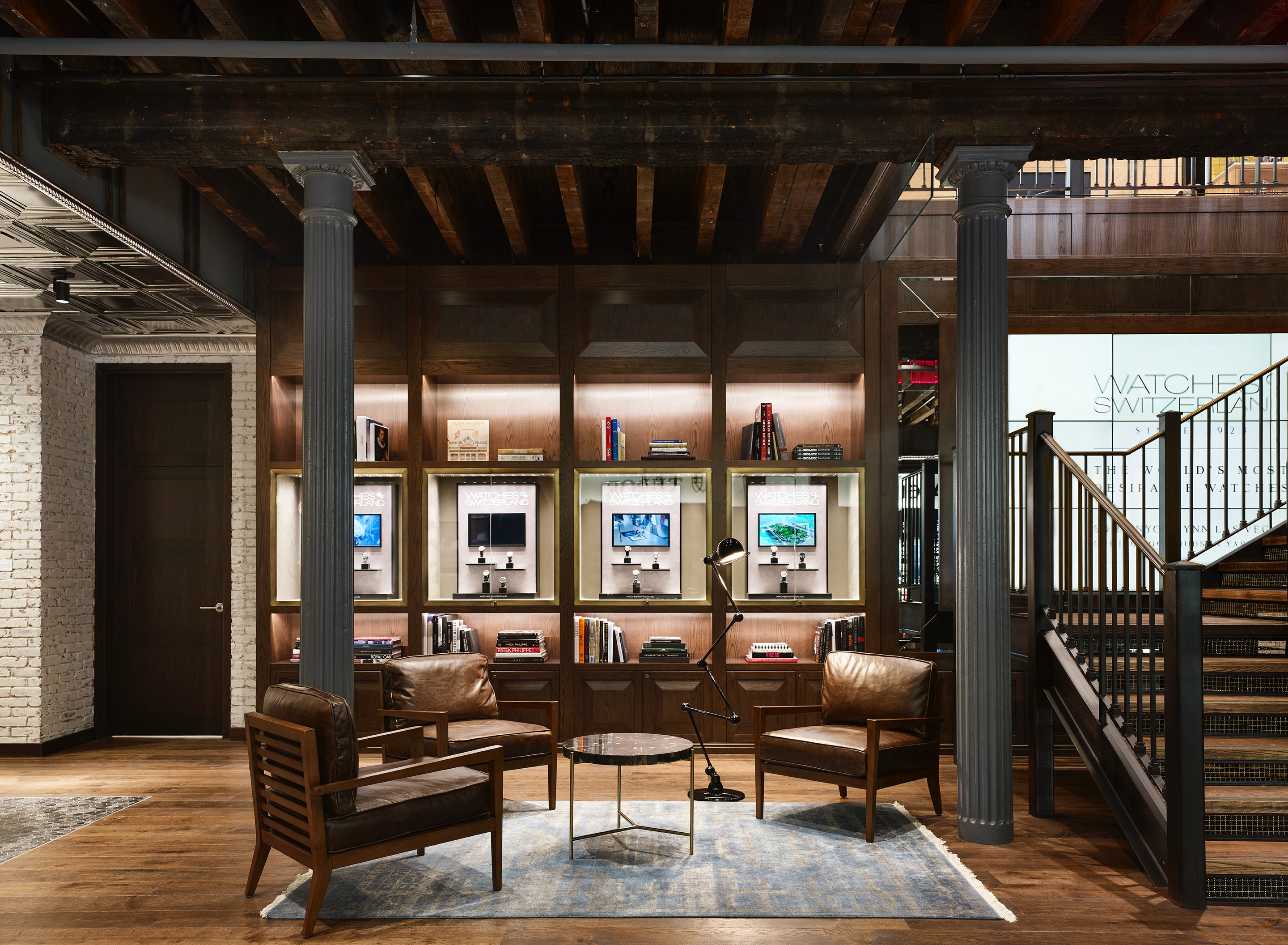 Inside a Watches of Switzerland store | Source: Courtesy

Indeed, both Tourneau and Watches of Switerland will only account for around 60 stores, leaving a “vast playing field,” according to Reginald Black, watch and luxury analyst at NPD in New York. “It’s really the dawn of a new day in retail in the US for luxury watches when you have a powerhouse brand like Watches of Switzerland coming to US creating whole freshened-up experience,” alongside Bucherer’s investment in market leader Tourneau. The market is also on the up, climbing 8 percent in the first-half — the first sight of growth in several years, driven largely by higher priced luxury watches.

Still, there is the tricky issue of luring in millennials and younger generations, who are more brand-agnostic and experience-driven. On watches, however, Duffy disagrees. “Our experience and research says that everybody is as interested in luxury watches as the generation before them. There’s a great feeling of authenticity and craftsmanship around mechanical watches that does appeal to that psyche.” Age 35-44 years is their “sweet-spot” and biggest shopping group, whose most popular brand is Rolex.

Digitally, a host of fast-moving grey market platforms, like Jomashop, Chrono 24, and Authenticwatches.com have tapped the market early. Today many big players still do not offer online purchasing, so while information on watches and even pricing is available for research, shoppers are typically guided to a store for viewing, leaving grey market vendors open to savvy shoppers. Duffy estimates the grey market has accounted for up to a third of the market by unit, though it is supply driven and shows demand is there, he argues.

For Watches of Switzerland online only accounted for 4 percent of sales last year in part due to Rolex and Patek Philippe, half of their business, not selling online. Brands that have adapted are feeling the benefit. Omega, Tag Heuer and Breitling are the biggest online brands, while Cartier is the fastest growing online brand. Online represents 10 percent of those brands’ sales.

“It’s going to be quite a reboot in 2019. The more competition we have in the US, the better it is for the market,” says NPD’s Black.